Annie Wright Schools have partnered with the Baishan School to offer our unique program to high school boys and girls in Qingdao, China. Baishan AWS launched in the fall of 2019 with Grades 9 and 10, adding Grades 11 & 12 in 2020 and 2021, with an eventual enrollment of 160-180 students.

Annie Wright Schools, established in 1884, and Baishan School, the oldest private school in China's Shandong province, have had a close relationship for more than two decades, since an exchange program began in 1996. The philosophical and educational match between the two schools inspired this exciting partnership. In addition to offering parallel curricula, the schools look forward to continuing exchange opportunities and furthering our mission to prepare students for a global society.

The Grade 9 curriculum will blend English and Chinese, allowing students to prepare for the Zhongkao exam, while simultaneously preparing them for Grades 10-12 in an English-only immersion environment. Baishan AWS plans to offer the same International Baccalaureate Diploma Program curriculum for Grades 11-12 as Annie Wright Schools in Tacoma. The program will also include college counseling to prepare students for matriculation into United States universities.

TRAVEL TO THE UNITED STATES

Prior to attending Baishan AWS, students will have the opportunity to spend three weeks at Annie Wright Schools in Tacoma. This trip will expose them to the school, the Pacific Northwest and American culture, and will offer intensive English in an immersive environment.  Between Grades 11 and 12 students will have a mandatory trip to Tacoma which will focus on preparing students for college testing and will feature a trip to west coast colleges and universities.

Qingdao is a port city on the west coast of the Yellow Sea, facing the Korean peninsula, with a population of around 9 million. Named China's most livable city by the Chinese Academy of Sciences, it is roughly equidistant between Beijing and Shanghai. Like Tacoma, Qingdao enjoys stunning natural beauty, surrounded by mountains and overlooking the ocean.
Learn more about this exciting program by emailing Lorne Brandt. 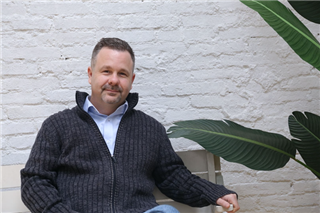 Lorne Brandt, Baishan AWS Program Director, began his education career in 2000 after graduating with a teaching certificate from Winthrop University. His first eight years were spent teaching Advanced Placement visual arts and coaching boys varsity soccer for a large public school near Charlotte, North Carolina. During these years he became chair of the Fine Arts department.

In 2009, Mr. Brandt became certified by the National Board for Professional Teaching Standards and then earned a master’s degree in Curriculum & Instruction in 2012. Seeking international teaching opportunities, he joined an international school in Qingdao, China, to establish the International General Certificate of Secondary Education Arts program and implement the school’s new information system.

Mr. Brandt returned to the U.S. in 2017 and married his wife, whom he met in Qingdao. He worked at a reputable school system in the fastest growing county in America. He returned to China in 2017 to establish a high school art program at an international school in Chengdu and was  named Head of Faculty for the Expressive Arts and P.E., and chaired the Standards Committee.

Lorne and his wife are residents of the beloved city of Qingdao, China, where they are close to family and intend to stay. They both enjoy exercising, hiking and traveling. Mr. Brandt is a practicing artist, producing oil paintings and pastel drawings that often illustrate traditional Chinese architecture. He is passionate about international education and continues to teach International Baccalaureate Diploma Programme students.

Founded in Tacoma, Washington, in 1884, Annie Wright Schools serve students from age three through high school. Annie Wright Lower and Middle Schools offer coed programs in Preschool through Grade 8, while separate Upper Schools for girls and boys offer day and boarding options in Grades 9 through 12. Annie Wright is proud to be an International Baccalaureate World School.